The Christ is the Answer missionaries held Easter services for the temporarily displaced in Rivne, Mykolaiv and Kharkiv regions. 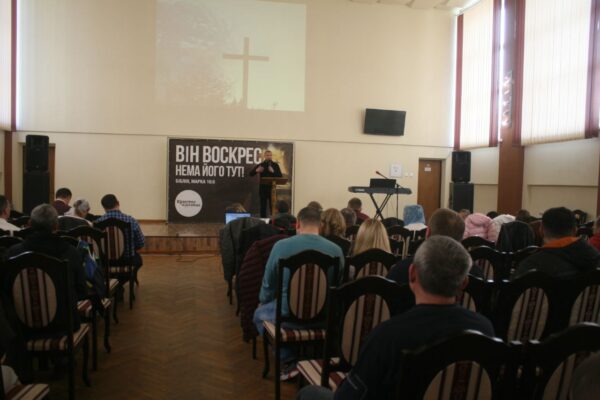 In Rivne, before the Easter church service, the team of CITA missionaries had conducted several charitable eye clinics for the temporarily displaced people and city residents, and had had street outreach events where they distributed the Christ is the Answer newspapers about Easter and invited people to services at the church of the same name. And at the Sunday service there were songs and a sermon about the essence of Easter.

Also, the Christ is the Answer missionaries held an event dedicated to Easter for temporarily displaced children in the Rivne Art Center, with a story about the events of the death and resurrection of Jesus Christ, with activities, prizes and sweets. 600 people, children and their parents, attended the celebration.

“We are thankful to God for being able to organize this Easter celebration for children at such a difficult time for Ukraine. We managed to invite many out of the temporarily displaced people who had moved from the warzone. More than 350 children heard the Good News about Jesus Christ, watched a Bible cartoon, received prizes and sweets. It is a great pleasure to realize that many have heard or reminded themselves of the true essence of the resurrection of Jesus Christ,” shared Hryhoriy Tyshuk, the organizer of the event, CITA missionary and minister of a church with the same name.

Sophia from Kyiv admitted that she liked the cartoon, competitions, and program hosts very much. She also said that she was happy to return home.

Pavlo, father of one of the young guests, whose family moved into Rivne from Ochakiv (Mykolaiv region) , thanked for such an opportunity to come to the Easter event together with his child. As it turned out, they had not adjusted to a new place yet and did not know where they could spend some time with the family.

Little Anton from Kharkiv liked the cartoon and his present the most.

Anna, a teacher from Kharkiv, also thanked for a joyful and friendly atmosphere at the event, in particular for the essence of Easter explained to her children.

According to CITA missionary and pastor in the Kharkiv region, Serhiy Tiurikov, there are significantly more people at the Easter service this year than in previous years. The missionary says that it is the war and the lack of finances has caused the increase: “Since we help the needy, many people come to the church for humanitarian aid, but there are those who want to listen to God’s word and come to church services all the time.”

Viktor Pavlyshyn, a missionary of the Ministries and the pastor of a church in New Odessa (Mykolaiv region) shared that this year the Easter celebration was distinguished by the fact that more than 10 new people came to the small church, whom the missionary team had invited during the distribution of food packages the day before. The pastor called this a significant increase, as because of the war actions, about 30 parishioners of the church were forced to leave the city.

“Since the church service was attended by new people, our Easter service was more evangelistic and after an altar call, the majority accepted Jesus Christ and were born again, judging by what they told us about the state they experienced after praying for the forgiveness of their sins,” Viktor Pavlyshyn shared.

For many people, the Bethany church in Mykolaiv has literally become a spring of water, because there has been no water supply in the city for two weeks, and the church has its own well. Every day, crowds of people come here. According to Henadiy Holota, a church minister and CITA missionary, ministers use the time of each guest in the line to preach the Gospel and help with groceries. Among the people who come to the church well for water, there are those who offer their help, willing to be helpful and do good deeds.

Henadiy points out that there are now many new people in the church, including at the Easter service, while half of the parishioners have been forced to leave the city. He also shares what he felt in his heart:

The Christ is the Answer Ministries were created for one global goal which is to spread the Gospel and preach the Kingdom of God throughout the Earth, using various tools for evangelism and ministry to people.

Press center of the Christ is the Answer Ministries.