CITA Evangelical Newspaper: Another Edition for Distribution Across Ukraine Is Printed

CITA Evangelical Newspaper: Another Edition for Distribution Across Ukraine Is Printed

To spread the Good News in Ukraine, the CITA Ministries have published another edition of the evangelistic newspaper “Christ is the Answer” of 130 thousand copies. The Christ is the Answer missionaries shared how this tool of preaching the Gospel works.

“In this issue, we stand up for Ukrainians who are killed in their mothers’ wombs, thus opening the door to the spirits of death (I once prayed for the release of a woman from the spirit of death that demons entered during anesthesia when she was having an abortion).

According to unofficial data, 40 million abortions have been made in Ukraine during the 30 years of independence. In order not to be like many Russian Christians who are silent when Ukrainians are killed, we need to tell people that abortion is a murder, because millions of Ukrainians are killed by Ukrainians themselves. And when a nation sows death, it reaps death,” said Ministries Director Taras Sen. 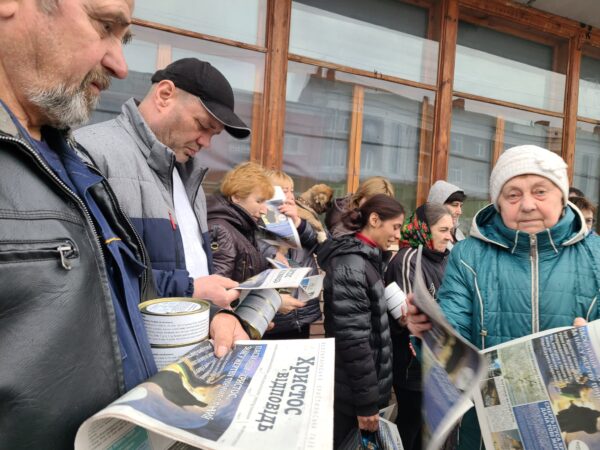 Andriy Vasenda, a CITA missionary in Ternopil and coordinator of the Ministries’ printing center since 2015, said that the annual circulation of the evangelistic newspaper is 720,000 copies (issued every two months). It is distributed in all regions of Ukraine, and is ordered by missionaries, churches of various denominations, volunteers and chaplains. The newspaper exists on voluntary donations.
Andriy believes that the print newspaper is a kind of hook to start talking to people about God, and is a good tool for reaching middle-aged and older people.

Christ is the Answer missionaries, who regularly distribute newspapers on the streets of the cities where they serve the people, talk about how this tool of evangelization works.
So, one homeless man in Rivne, having found the newspaper in a trash bin, came to church service from where he was helped to get to the rehab center.

According to CITA missionaries in the Western region, people often seek the pastor’s prayerful support and advice. There have also been cases where people have called on the verge of suicide and, with God’s help, gained freedom from such a condition.
The missionary in Ternopil was repeatedly asked questions of a spiritual nature, was approached about financial aid, and asked how to get to a church service.

The missionary from Kharkiv region shared that since his phone number is indicated in the newspaper, people call him every day: “Unfortunately, 75% of such calls are from believers who need spiritual help.” The missionary redirects some of them to other ministers and helps some of them himself. Through the ministers’ prayer, people also received the baptism of the Holy Spirit. At the same time, people call to thank them for their help.

In Ethiopia, 200,000 “Christ is the Answer” newspapers were previously distributed in the Amharic language, and 100,000 copies were published in June.

The main purpose of the Christ is the Answer newspaper is to preach the Gospel. The newspaper contains useful articles for life based on Biblical values, testimonies and stories of repentance, good news, a hotline phone number and addresses of evangelical churches. Since the creation of the Ministries, more than 5 million copies of newspapers have been distributed at various events.

The Press Center of the Christ is the Answer Ministries.